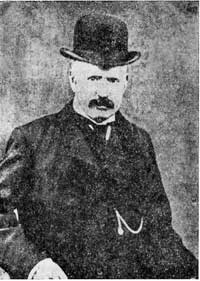 William Farrow is Carlton's most infamous resident, as in 1912, in Hanslope in Buckinghamshire, he shot and killed his employer the local squire before turning the gun on himself! It is thought that he was upset that he was being sacked by the Squire from his job as a gamekeeper - this would also have entailed loosing the tied cottage which his family lived in.

The full story can be found on Hanslope's local historical society's website (which puts this site to shame!)

William Farrow was actually born in Carlton Green - he was the son of Robert Farrow, an agricultural labourer, and his wife Jane.

He appears in the 1871 census (not typed up on the site yet!) as the youngest child of the family:

The property is just listed as Thurlow Road, which is the road that leads from Carlton Green to the Thurlows (Gt & Lt), it is unlikely that this house still exists - the 1910 land tax map shows a group of cottages (probably for workers) in Thurlow road which have since disappeared (the Farrows are not listed as living there then though - hardly surprising since they'd be 87!).

It is possible (but unlikely) that it referred to one of the few (still remaining) houses on the Carlton road.

In 1881 William Farrow was 17 and living (unmarried) with his parents in Carleton Green, he was now listed as an agricultural labourer. His mother's birthplace is now given as Mathwold, Norfolk (I'll have to look these up on the map to see if they are the same place).

In 1901 his parents were still listed living in Thurlow Road (presumably the same house), but William has left.