Whilst Finchley Gate Farm is in the hamlet of Carlton Green, Cambridgeshire, it is actually lies within the parish of Weston Colville. It is also known as Finches Farm (according to its sign!). 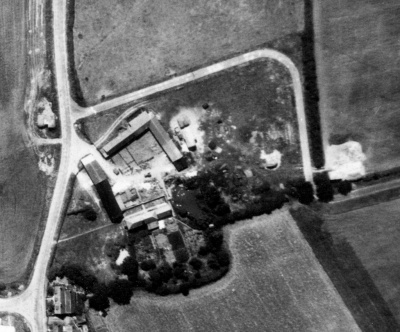 By 1891 Finchley Farm was occupied by Philip Daniels (68), a farmer, and his wife Ann (68) and son Joseph (28) all from Balsham. Also with him are his grandchildren from Babraham Walter Linsdell (19) and Arthur Linsdell (15).

Farm workers described at an inquest at Royston (Herts.) yesterday how they heart an aeroplane apparently in difficulties during a snowstorm.

The inquest was on Mwldwen James Grover, 27, of Carlton, Cambs., a salesman who was discovered dead near a wrecked plane at Kelshall, near Royston, on Friday.

It was stated that Grover has been flying for some years, and on Thursday was on his way from Cambridge to Reading.

Robert Deards, of heath Farm, Kelshall, said he was in a cartshed when a snowstorm came on. He heard an aeroplane approaching and from the sound he judged that it ran into the storm.

An Air Ministry inspector said that apparently the pilot in retracing his course to get out of the snowfall, lost control of the machine previous to being blinded by the snow. The machine must have struck the ground in a steep dive.

The jury returned a verdict of "Death by misadventure."

List of intestates whose estates will, in the absence of kin, be administered by the treasury solicitor on behalf of the crown:- ...

Dived into the ground in snowstorm, Kelshall, near Royston