The Domesday Book was a census ordered by William the Conqueror in 1086 AD to determine what taxes could be levied from all the lands he had gained in his victory. The National Archives Website describes the complex hierarchy of ownership of land.

Starting with King William, there were then Tenants-In-Chief (Lords and Church institutions) whose right to the land came directly from the king. The tenants-in-chief then sublet to other nobles, who kept some of the land for their own benefit (the land called Demesne), and the rest was sublet to the general population for various rents (in money, goods, or services for example for farming the demesne, or providing fighting men). Estates were called manors, and the manors did not correspond with parishes - there could be several manors that includes parts of the parish of Carlton.

The first part of each record lists who owned the land in 1086, but the last section also states who owned it before the Norman invasion 20 years earlier.

The whole of the Domesday book is available online, with a page on Carlton.

Here are the Carlton specific sections reproduced, with translations. 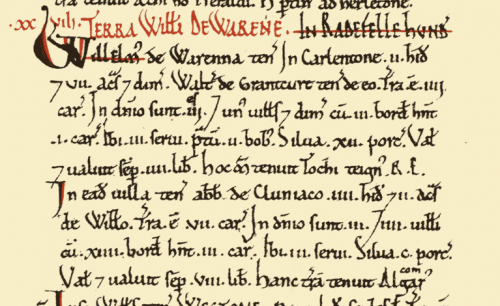 In RADFIELD Hundred William of Warenne holds 2 hides and 7.5 acres in CARLTON. Walter of Grand-court holds from him. Land for 4 ploughs. In lordship 3;

The value is and always was £4

Note: this refers to King Edward as being the previous rightful owner, this is because King William did not recognise Harold as King.

In the same village the Abbot of Cluny holds 4 hides and 2 acres from William. Land for 7 ploughs. In lordship 3;

The value is and always was £8.

In CARLTON Wymarc holds 1 virgate of land from the Count. A Freeman held it; he found cartage.

Wymarc also holds 1.5 hides from the Count. Land for 3 ploughs. In lordship 2;

Young Godwin held this lad under Edeva; he could not withdraw.

Land of Hardwin of Scales

In Carlton 2 men-at-arms hold 0.5 hide less three acres from Hardwin. Land for 0.5 plough; it is there. The value is and always was 10s.

2 Freemen held 38 acres of this land under Harold and found 1 escort for the Sheriff; a third held 8 acres from Earl Algar and found cartage, but he could not withdraw.

In CARLTON the Countess holds 3 hides. Land for 8 ploughs. In lordship 1.5 hides; 2 ploughs there;

The value is and always was £6.

Earl Harold held this land.
3 Freemen hold 4.5 acres of the same land from the Countess; they held it themselves before 1066 and found escort. A man of Earl Algar's held 2 acres and found escort.

Note: Countess Judith was a niece of King William, hence a Norman.