Over the centuries in Carlton many buildings have simply disappeared without trace. It seems incredible these days that a house could be demolished (or allowed to fall down) without another (or two..) being built in its place. This section hopes to remind us where some of these were. 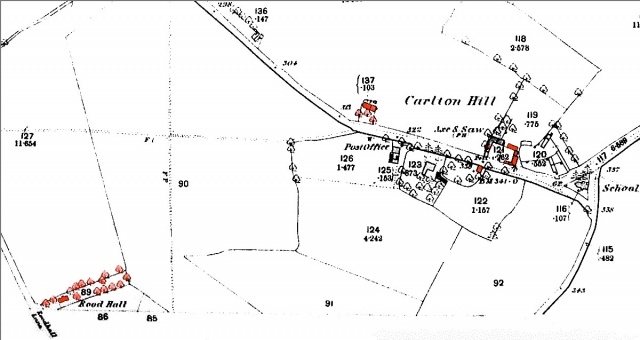 When it is suggested that Rood Hall has been demolished most locals will point out that it is still standing quite happily in Carlton Green on the Thurlow road. However, once upon a time there was another Rood Hall. This one stood halfway down the green lane between the Rectory and the river Stour (as shown in red on the map below). Hence this green lane was at the time known as Rood Hall lane. Thus when the census of 1851 mentions Rood Hall (on Rood Hall lane) it is clear from the context that it is referring to this Rood Hall. In 1861 it is again mentioned in the census, however it has different occupants and the context could imply either location. It would be interesting to know when and why the Rood Hall in Carlton Green was so called!

It would be nice to think that the wild apple trees growing in the green lane today are descendants from some tame varieties from the garden of Rood Hall (although they're very small fruit!).

There once stood a pair of cottages on Brinkley road, on the corner between Hillcroft (the old Axe & Saw) and Kingsfield. They are shown roughly in the center of the map above. There is no sign of these (apart from possibly the fact that the ditch goes through a pipe here), the land is just a uniform part of the larger field now.

The barns shown on the map next to the Axe & Saw (now Hillcroft) had mostly disappeared by 1971, with the remaining stable being demolished to make way for the construction of The Gables. Also at some point a part of the main house itself was removed from the gable end closest to the road, as was a lean to building from the right.

Norney farm was a neighbour of Lophams hall. Now nothing remains but a ploughed field apart from the farmyard pond which is now surrounded by trees and shrubs.

The 18th century Hillview cottage (opposite the Axe & Saw on the above map) was demolished in 2003 after the previous owner Mrs McGregor passed away. Two new houses were built on its land. Hillview has its own page.

How something as large as Carlton Grange farm can disappear without a huge effort is amazing - there is nothing left apart from woodland now of this large country estate. This is a farm that was so large it used to field its own Cricket Team.